You are here: Home » News » China remains reliable supplier of global fashion brands amid trade tensions with US 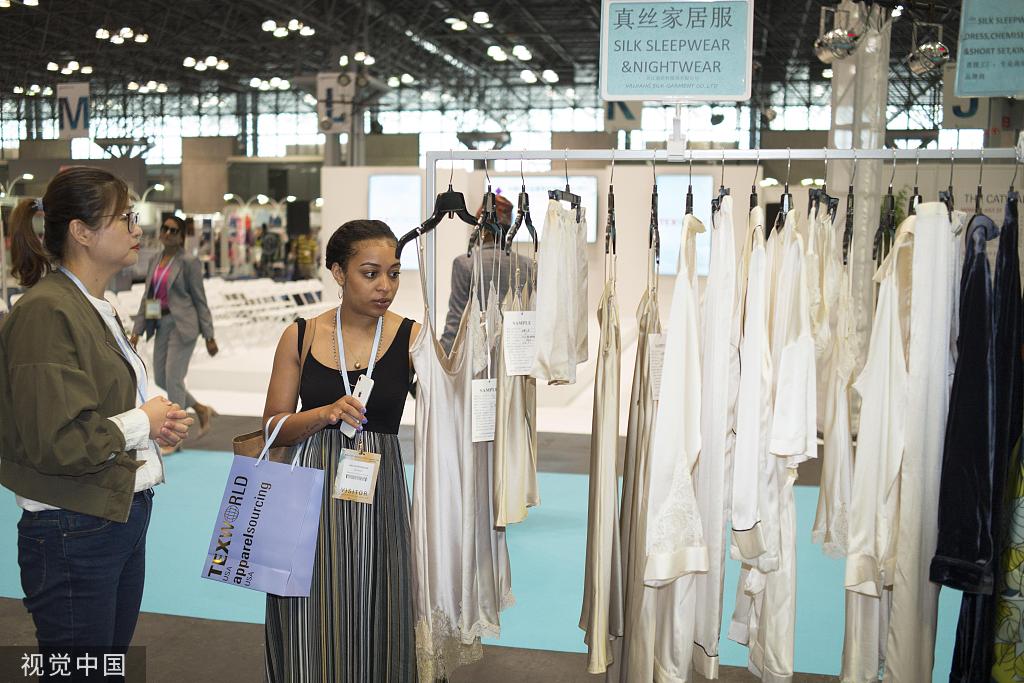 NEW YORK - With its high efficiency, research and development capacity as well as a mature transport and logistics services, China's textile and apparel industry remains the most reliable suppliers of global fashion brands despite potential supply chain disturbances from the ongoing China-US trade tensions.

This was a key message shared by industry insiders at the 20th China Textile and Apparel Trade Show at New York's Javits Center in late July.

Over 500 Chinese garment, fabric and textile companies, plus other 300 companies from 16 countries and regions attended the show, which was held in parallel with Home Textiles Sourcing, Apparel Sourcing USA and Texworld USA expos.

There were only 192 Chinese exhibitors when the China-featured trade show debuted in the United States at Pier 92 along Hudson River in June 2000, recalled Xu Yingxin, vice-president of China National Textile and Apparel Council (CNTAC).

In the past 20 years, Xu said, China has established the most complete industry value chain in the textile and apparel business.

"This is one of the big strengths for the Chinese industry and part of why China is the top supplier and we think China will remain the top supplier," said Julia K. Hughes, president of US Fashion Industry Association (USFIA).

"No other country or region in the world could match China's enormous production capacity in the textile and apparel industry in the foreseeable future," said the 6th annual Fashion Industry Benchmarking Study, penned by Sheng Lu, associate professor at the Department of Fashion and Apparel Studies of the University of Delaware, in cooperation with the USFIA.

"There is no problem for China's textile and apparel industry to keep competitiveness for at least ten years given Chinese unrivaled output of chemical fiber, lower costs of raw materials, sound talent and technological resources as well as one of the most dynamic and biggest domestic market in the world, " said Li Bo, vice-president of China Textile Information Center.

The Chinese textile manufacturers are "proactively" moving toward automation and smart production through technological innovation, and nurturing indigenous brands to "move up the value chain," noted Xu.

Ma Jiaqiang, head of home textile division with Jihua 3542 Textile Co Ltd, said his company has long set up its own laboratory and a nation-level technological center in Xiangyang, Hubei province in Central China.

"We're the earliest to develop such functional fabrics in the market, and we remain unchallenged in comparison with competitors," said Ma.

Hou Chunshui, a sales manager with Shandong Charming Hometextile Company Limited, said the company, which specializes in fabrication of bed linens, cushions and coverlets, has been constantly updating their original designs to stay attractive to global buyers.

Rory O'Mara, CEO and owner of e-commerce platform Saphyr Home, which offers linen and cotton bedding products, said she got her best choice from Hou's company.

Cashmere yarn exporter Consinee has invested $80 million with its partners to realize the unmanned automatic operation of the entire process of transporting, loading, locking, pressing, dyeing, dehydrating, unloading and drying of raw materials. The production line will become highly automated.

The ongoing trade dispute between the United States and China "actually is pushing Chinese manufacturers to move up more upscale" and "shift their production away from products that don't need to be made in China," said Hughes.

Chinese textile and apparel players are also expanding their presence in Southeast Asia, Africa, Americas in a bid to seize new market opportunities and reduce risks.

Like what happened in developed economies, Li said, "it's a natural trend for China to transfer labor-intensive businesses outside of the country and retain the parts with high added value or technologies."

Xiaofeng Li, managing director of Nantong Fenglan Textile Co Ltd, added two plants in Bangladesh in 2012 while maintaining operation of his own production capacity in China.

"We have plants in China, Cambodia as well as Central and South America and registered a company in the United States," said Simon Lu, managing director of Feiya America Inc..

The arrangement could allow customers to collect their orders at the warehouse of Feiya America Inc. in Florida and it only take three or four days to ship products to the United States from its plants in Central and South America, according to Lu.

"China is here to stay"

The tariffs battle with the US will do little to shake China's role as a dominant textile and apparel supplier for the US market with only 6.7 percent of respondents expecting to decrease sourcing from China significantly in the next two years, a recent industry survey found.

With silk and cashmere products at its core, it is really difficult for US fashion brand Vince to source outside of China for reasons of supply chain, skill-sets and many others, said Mark Engebretson, executive vice president of global operations with Vince in a recent interview with Xinhua.

Vince works with just a few suppliers in China and this makes Vince and its Chinese suppliers highly dependent on each other.

"China isn't gone away. It's here to stay." Engebretson said.

"Now, we just offer a bottom price to our US customers and would not bear any additional costs," Whiskey Zhang, manager of Chinese company Tongxiang Yuhang Fur Product Co Ltd told Xinhua at Texworld USA.

"US importers have no choice but to bear most of the costs as only China has such a complete industry value chain in fur business," he said.

Nicolas Becerra, director of sourcing/fabric & new source development at Weissman, a company that makes costumes such as ballet wear, said "no place can beat" Shaoxing, a city in eastern China's Zhejiang province, in terms of "product quality, price, service, and flexibility."

"If tariffs go up, we'll have to raise price, so does every one of our competitors. Consumers will have to pay more," said Becerra.